If you have shopped for around for an optical sight for your tactical rifle lately, you may have noticed a new term being thrown around that you might not be familiar with - the prism scope.  A prism scope (sometimes also referred to as a prismatic scope) is a scope that uses a glass prism to focus an image as opposed to traditional rifle scopes which use a series of lenses.  This allows for a more compact design while still allowing for many of the same benefits such as a magnified image, an etched reticle, reticle illumination, and a focusing eyepiece.

Prism scopes are typically limited to lower range magnifications, from 1x to 5x.

The compact size and lower magnification range makes them well suited for AR-15’s and similar tactical rifles. They serve as an good alternative to other short range optics such as ACOG’s, Aimpoints, or red dot sights.

Key advantages of a prism scope over a red dot sight:

Disadvantages of a prism scope versus a red dot sight:

Given its attractive size, functionality, feature set, and increasingly attractive price point the prism scope is becoming a popular option for AR-15 owners looking for a middle ground between a rifle scope and a red dot sight. Monstrum Tactical offers two body styles in Black and FDE with 1x, 2x, 3x, & 5x magnification. 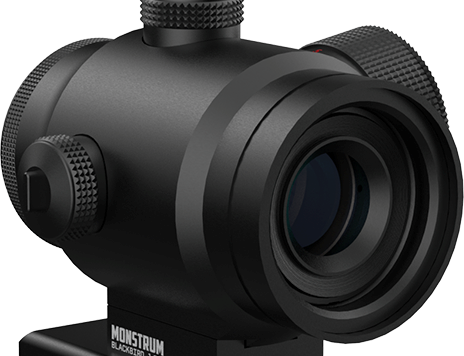