It is easy to get caught up in outfitting your AR-15 with glamorous accessories like high-tech optics and cool tactical handguards, stocks, and grips. While these are great ways to upgrade your rifle, many shooters overlook the importance of a good rifle sling.

The average AR-15 weighs approximately seven pounds unloaded. When you add in the weight of all your cool accessories and a fully loaded magazine, toting your weapon across several miles of rough terrain could easily tire you out. A good sling will allow you to keep your hands free, keep the weight of your weapon evenly distributed, and can even improve your shooting.

Whether you plan to spend a few hours shooting at the range or a few days hunting in the field, a sling is a critical piece of gear. However, choosing the right sling for your shooting needs isn’t always an easy task. While a sling’s primary purpose is to help you carry your weapon, the type you need depends largely on your shooting style and personal preferences.

Here are a few things to consider when choosing a sling for your AR-15.

Typically, slings fall into one of three main categories - single-point, two-point, and three-point. There are also a few specialized slings designed for specifically for marksmen. Let’s take a brief look at each type so you can get a better idea which will best meet your shooting needs.

A single-point sling has a single point of connection with your weapon. Imagine a sort of lasso that slips around your head and dominant arm with a clip that attaches your rifle, allowing it to hang freely in front of you.

The single-point sling provides maximum freedom of movement. It also allows for rapid transitions and easy aiming, especially in close quarters situations. When not in use, the rifle hangs in front where it is easily accessible (or it can be pushed to the side if you need it out of the way).

Another potential problem is being smacked in the knees (or groin) by your weapon when moving hands-free from point A to point B.

However, when it comes to simplicity, the single-point sling is as simple as they come. 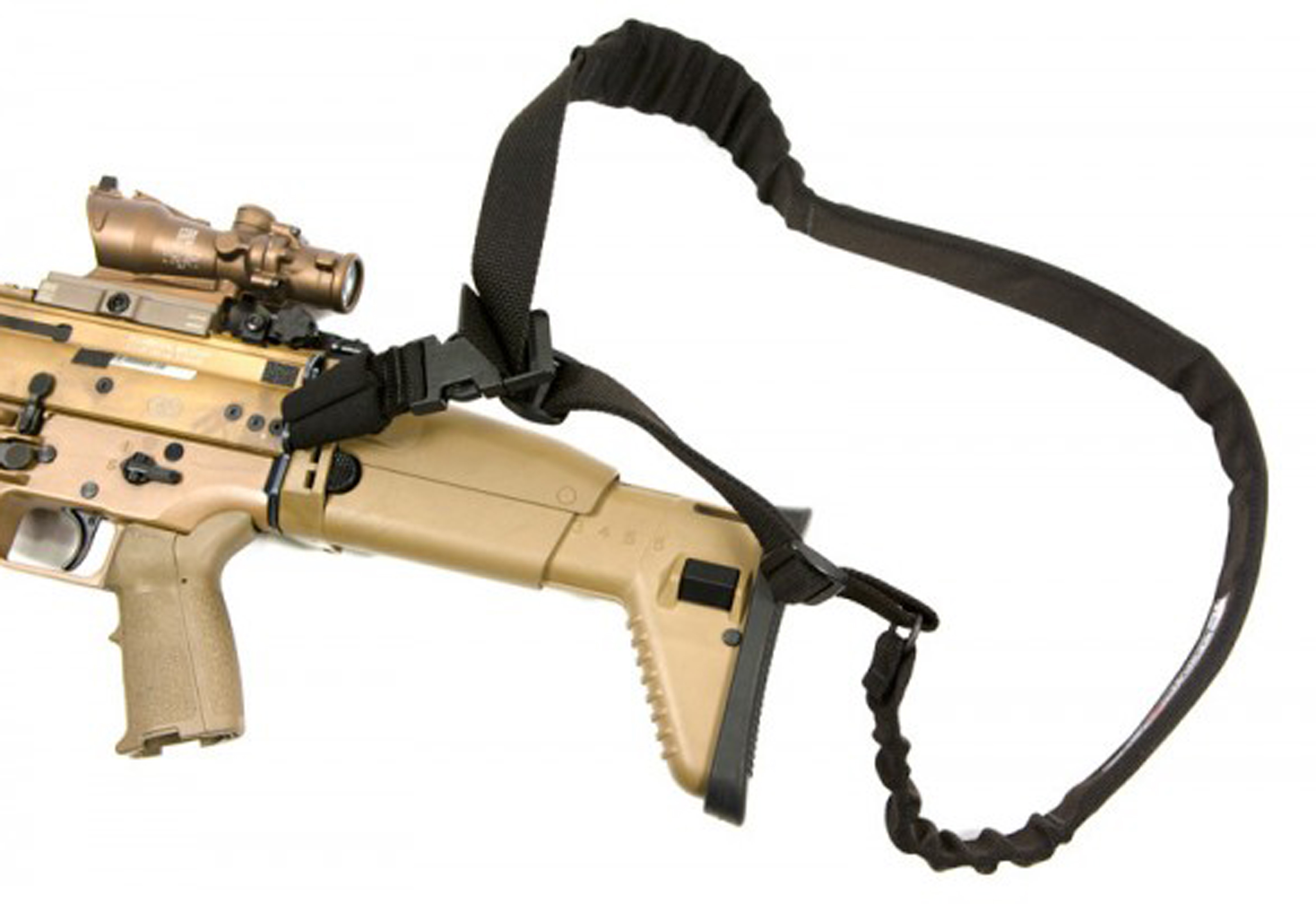 When most people think of a rifle sling, they think of the traditional two-point version. Your Daddy probably used a two-point sling on his favorite hunting rifle. This design has been around for generations and consists of a simple strap that runs between the rifle’s barrel and stock, allowing you to easily carry your weapon on your back.

However, modern two-point slings differ from the one on Dad’s hunting rifle. The contemporary two-point sling allows the rifle to hang in front of you rather than across your back. With the barrel pointed toward the ground and the stock near your dominant shoulder, you can smoothly transition the weapon into shooting position or push it to the side until it is needed.

You can also wrap your support arm under and around the forward connection of your two-point sling to increase shooting stability. This is particularly useful when engaging distant targets as the extra stability increases long-range accuracy.

Unfortunately, you trade some mobility for the extra stability of a two-point sling. Transitioning your weapon can be clumsy, especially for inexperienced shooters. Some two-point versions feature quick-adjust tabs that allow you to increase or decrease the slack in your strap as you shoulder your rifle. While a handy feature, it still takes some serious practice to achieve a smooth transition. 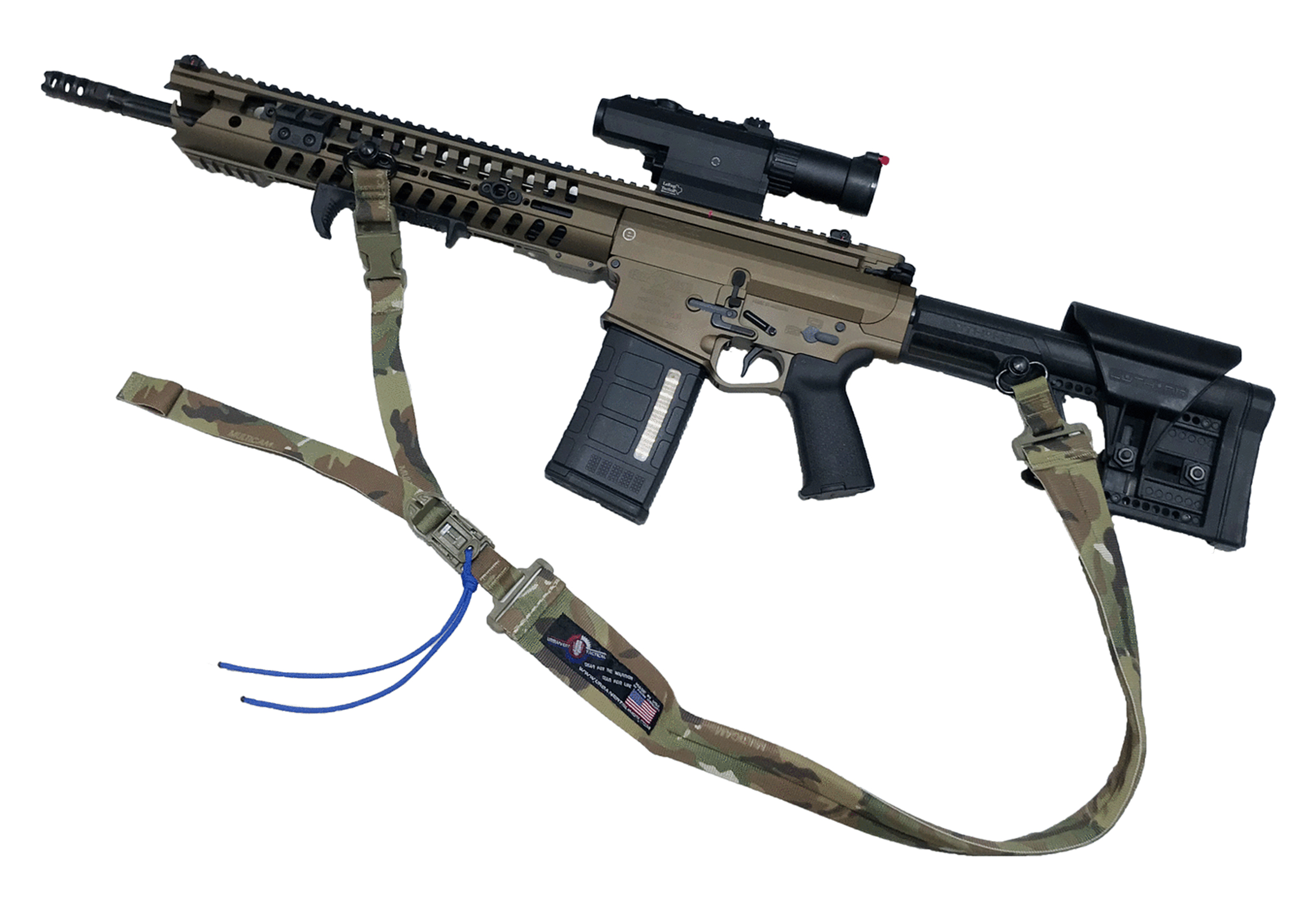 Although the three-point sling is a bit complicated, it does several things well. First, it secures your rifle to your body and keeps it there. This is good news for your knees when you need to move hands-free.

A three-point sling also makes it pretty easy to transition between different carry positions and keeps your rifle within easy reach. This allows you to easily transition from rifle to sidearm without excessive fumbling.

The biggest problem with a three-point sling is it is just plain complicated. And while it might be easy to get used to the complexity, they have been known to hang up on the bolt release or ejection port of some rifles.

While the main purpose of the previously mentioned slings is transport, there are other types of slings that can help improve your shooting.

Although at first glance a Ching Sling looks like a three-point sling, it actually connects to your rifle at three distinct points. A Ching Sling is basically a standard two-point sling with another smaller strap connected to the gun’s center stud. When it is time to shoot, you simply slip your arm through the loop between the first and center studs. This allows you to pull the rifle tightly into your shoulder for a steadier aim.

A favorite among sharpshooters, this simple design is just like a standard two-point sling, but with an additional cuff you can loop around your bicep for extra shooting stability.

The material used to construct a sling has a major impact on its quality and durability. It also impacts comfort, which is particularly important if you’ll be wearing your sling for long periods.

Leather is the traditional material for rifle slings. While leather is durable, it can stretch over time affecting the fit of your sling. Leather can also be difficult to adjust. However, the extra traction leather provides can help keep your adjustments in place, especially when you need to move around a lot.

Heavy-duty nylon is a popular material for modern tactical slings. Nylon is lighter than leather, but many shooters find it isn’t as comfortable.

Padding is another thing to consider when purchasing a sling for your AR-15. Some extra padding can definitely increase comfort, but some shooters dislike the extra bulk of a padded sling.

Which Sling Should I Get for My AR-15?

While the “best” sling is largely a matter of preference, here are a few key things to keep in mind:

Whatever type of sling you choose, practice is essential. Whether you’re hunting big game or defending your home, you need to shoulder your weapon smoothly and quickly to be effective. You should also become familiar with how your rifle feels and functions when strapped to your body.

As with all things firearms related, there is no substitute for practice, so make sure you hit the range and put in some training time with your new sling.