The shotgun is one of the most versatile weapons on the planet. The workhorse of the hunting world, the shotgun is often used to hunt everything from monster whitetails to tiny upland quail. For many, the shotgun is their preferred weapon for home defense. Police and military personnel use them for a variety of tactical applications. And for those with a competitive spirit, shotguns are used for sporting clays and 3-gun competition.

Not long ago, if you had stepped onto the range or the hunt club with a shotgun-mounted optic, you would have been laughed right off the premises. Shooters once thought optics were reserved for rifles and long-distance shooting. Because shotguns are usually loaded with shells that fire multiple projectiles at once, precision accuracy isn’t all that necessary. A shotgun optic seems counter-intuitive. Maybe even dangerous.

However, the world of optics has advanced significantly in the past several decades. Shotgunners are no longer limited to basic rifle scopes. We’ve basically left the stone ages of optics behind and a whole new world of opportunity has opened up for shotgun aficionados. 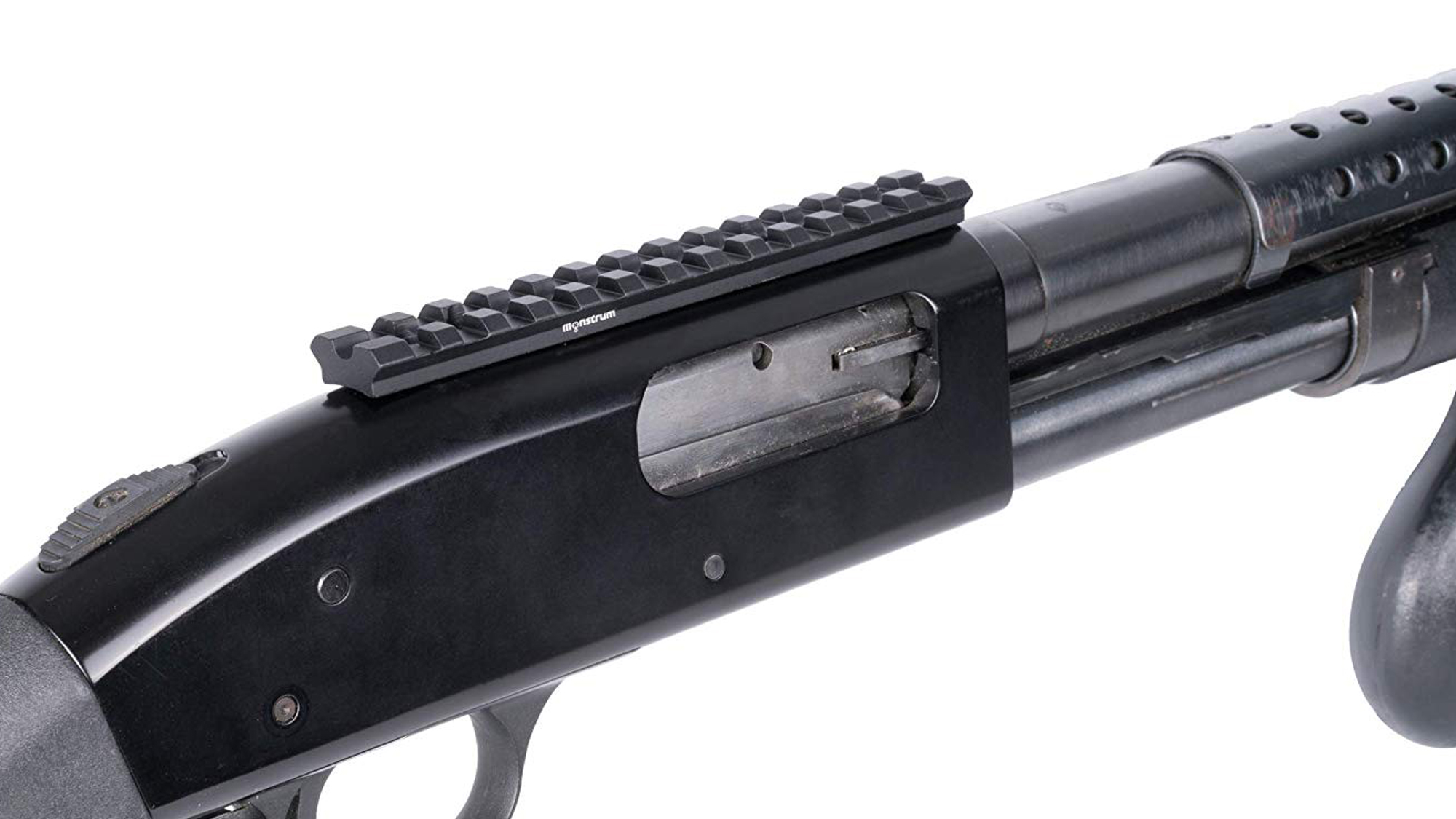 When to Use an Optic on Your Shotgun

If you’re busting clays or shooting birds, an optic may actually do far more harm than good. Proper wing shooting is largely intuitive and requires all your focus on the bird or clay target. You need to keep both eyes open while your brain subconsciously leads the target and times the trigger pull. An optic of any sort can interfere with this instinctive process, drawing your focus to the reticle and away from the target. An optic forces you to concentrate on aiming rather than the all-important lead and follow-through.

However, when dealing with a relatively stationary target, a quality optic can be a shooter’s best friend. A magnification scope, especially when mounted on a slug gun, can aid deer hunters with distant shots where precision is paramount. A quality optic can also help turkey hunters, who generally use tight chokes and narrow shot patterns, know their exact point-of-aim.

As 3-gun competitions gain popularity, more shooters are using reflex sights for faster target acquisition. This is important in high-stakes competition shooting when every second counts.

Additionally, many homeowners are outfitting their home defense shotguns with red dot or reflex optics. These optics are easy to use, even under duress.

There are several types of modern optics that you can use on your shotgun. Each comes with its own set of strengths and weaknesses. Which one is best depends on what type of shooting you plan to do. Here is a basic rundown of the different types of shotgun optics available to the modern shooter.

Although originally developed for rifles and long-range shooting, scopes do have a place in the shotgun world. With the development of machined CNC slugs and fully rifled barrels, the range and accuracy of the standard shotgun has increased exponentially.

Many states restrict deer hunting to shotguns only, so for many hunters, a rifle is not an option. Fortunately with a good slug gun, advanced ammunition, and a quality optic, hunting with a shotgun has become almost the same. Almost. Gravity still affects heavyweight slugs, limiting their effective range compared to any centerfire rifle. However, good slugs and accurate shooting can produce quick, humane kills out past 100 yards.

Because even the best slug gun still has a limited range compared to a rifle, you just don’t need excessive magnification on your shotgun scope. 1.5x to 9x is a good range.

When it comes to reticles, there are more designs to choose from than there are deer in the woods. However, hunting whitetails with a slug gun is done at relatively close range, so there’s no need for anything too fancy. Deer are crepuscular animals (meaning they are most active at dawn and dusk), especially during hunting season. Reticle visibility in these half light conditions is a must, so you should seriously consider a scope with an illuminated reticle.

Projectile drop also needs to be taken into account when hunting with slugs. There are several scope models on the market that feature reticles specifically designed for weightier slugs. If you plan on making long-distance shots with your shotgun, you should consider forking over some extra cash for one of these.

While we’ve talked a lot about scopes for hunting deer with a slug gun, turkey hunters can also benefit from a quality scope. Magnification is much less of a concern since shots are rarely taken out past 40 yards, so choose a scope with low or no magnification. Serious turkey hunters will appreciate specialized scopes with diamond-shaped reticles. All you need to do is place that diamond over the gobbler’s tell-tale red, white, and blue head, and press the trigger.

One very important thing to consider when purchasing any scope for your shotgun is eye relief. Because shotguns and recoil always go hand-in-hand (especially when you’re shooting slugs), you’ll need more than the average scope tends to offer. The average shotgunner needs at least 3.5 to 4 inches to prevent black eyes. You’ll probably want 5 inches if you’re shooting slugs. 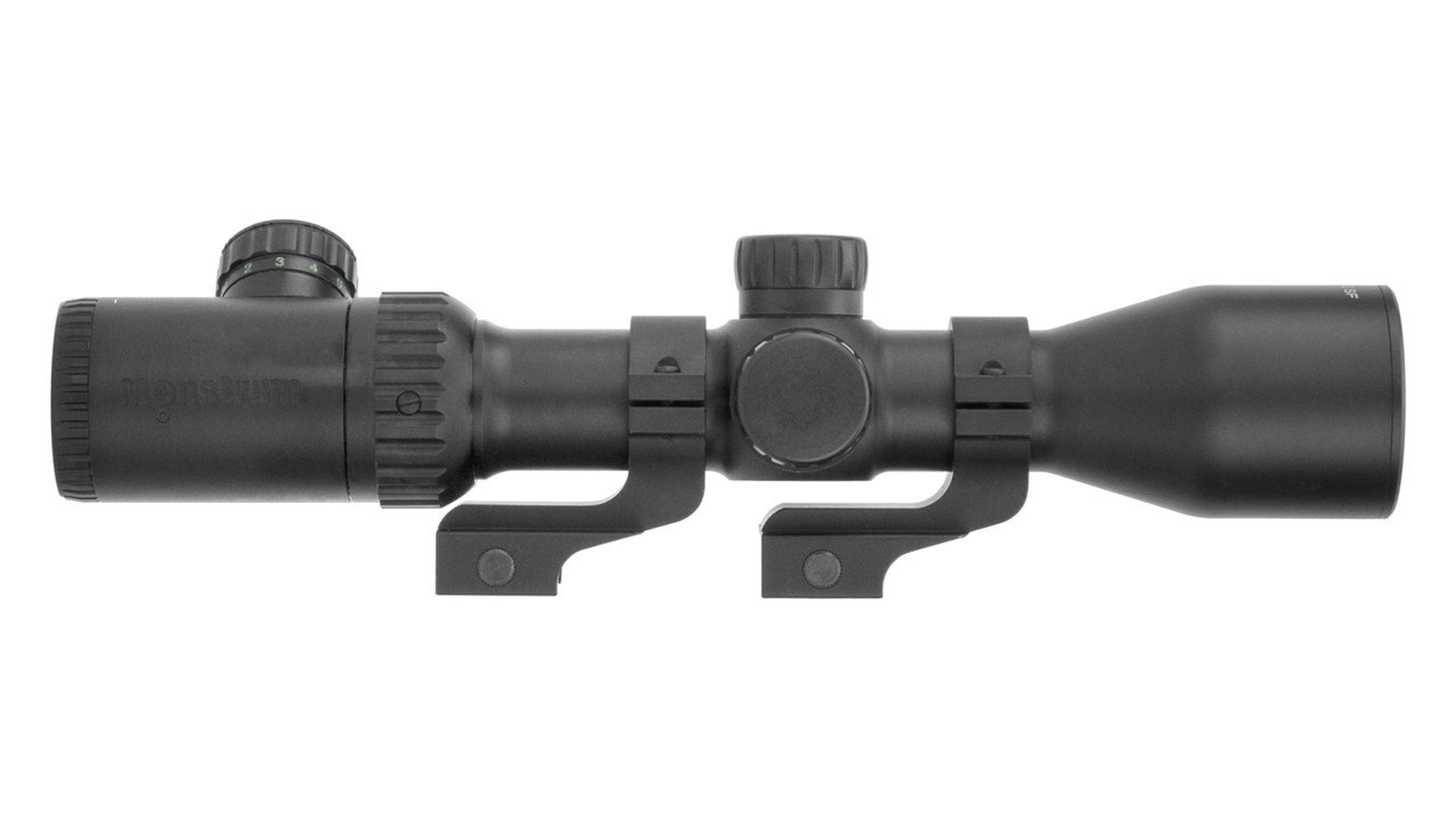 Although hunting whitetails with a slug gun usually involves a fairly stationary target, hunters in dense woodlands often jump deer. A red dot optic is more suitable for shooting deer on the run than a lens scope. Because a red dot optic allows for quick target acquisition, pulling a dot on a bounding 50-yard target is a lot more practical than lining crosshairs.

Red dot optics are a popular choice for 3-gun competitors for the same reasons.

Since shooting basics can also go out the window in stressful shooting situations (especially for infrequent or inexperienced shooters), red dot sights can be a valuable tool for self-defense shooting. No need to maintain a proper cheek weld to effectively aim your shotgun. You can deal with the recoil bruise later, after the threat has been eliminated.

Commonly used on 3-gun pistols, reflex sights can also be a handy addition to your home defense shotgun. These sights are highly intuitive and allow you to keep both eyes open, preserving precious situational awareness.

Also, reflex sights have no eye relief requirements, so they can be mounted at any distance your rail options allow.

Less commonly used on shotguns than most other optic styles, holographic sights have an almost religious following, probably due to their prevalence in video games and military applications.

Holographic sights create an aiming point with a laser that illuminates a holographic film suspended between glass plates. These sights are both highly precise and highly expensive. Battery life can also be a serious drawback since lasers require significantly more power than a standard LED sight. However, if being tacti-cool is your main goal, then it's hard to beat a holographic sight.

Monstrum offers a wide variety of scopes, red dots, and mounts and adapters for your shotguns.